Noel Connor was born in West Belfast in 1954. His mother had been a linen mill worker 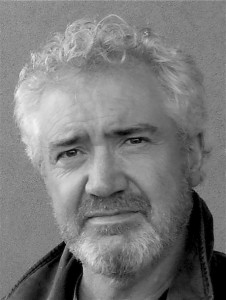 from the Falls Road and his father an English soldier stationed in Northern Ireland. He studied Fine Art in Belfast and in the North-East of England where his father was born. On completion of his degree, he was awarded a post-graduate scholarship to combine Fine Art studies with research into Irish Literature.

When he lived on Tyneside in the 1970’s he regularly attended the memorable Friday night Morden Tower readings on the Newcastle City Walls, and was able to meet and listen to the likes of: Seamus Heaney, Tom Paulin, Michael Longley, and Ciaran Carson. It was here that he first worked with the Charlotte Press and the fledgling Bloodaxe Books, producing publications with both Seamus Heaney and Tom Paulin. For a time he lived near two remote stretches of the Roman Wall, at Errington in Northumberland and Birdoswald in Cumbria. Here he met and worked with the remarkable Chinese artist Li Yuan Chia at his gallery in Banks, initiating Wall, a collaboration between four artists and four poets, published by the LYC Press. Collaboration has remained central to his creative practice and he has been involved in many more artist and poet publications and projects. This includes working with poets such as: Gerald Dawe, Maura Dooley, John Heath-Stubbs, Roger Garfitt and on two occasions, with his friend the painter Paul Stangroom.

He continues to exhibit widely in Ireland and Britain, and his images and writings have also appeared in various magazines including: Poetry Review, The Times Literary Supplement, The Honest Ulsterman, Krino, Lexicon, The Galway Review, Stand and Outposts. Noel’s artwork has always maintained this very close affinity with the written word but increasingly his own poetry has emerged to be considered alongside the artworks. He has received prizes and awards from various festivals and competitions including: the Allingham, Canterbury, Buxton, Whitworth, Portico and the Aurivo North West Words.

More recently he has used film and sound recordings to combine and present all aspects of his work. Based in the Staffordshire Moorlands, he spends part of each year working in Donegal on the north west coast of Ireland.

Waiting for the Number 12 – A solo exhibition of film, photography and new poetry.
The Gerard Dillon Gallery, Cultúrlann, Belfast. Supported by the Arts Council of
Northern Ireland. The exhibition was also shown at the Linen Hall Library as
part of their ‘Belfast’s Home Of Poetry’ special events programme..
Frontier Work – Four contemporary artists explore the concept of borderlands.
Curated by Garrett Carr, organised by Artlink Donegal and supported by the
Arts Council of Ireland. The Regional Cultural Centre, Letterkenny, Donegal.

An Ungoverned Sky – Paintings by Paul Stangroom with poems by Noel Connor.
A full colour hardback book, exploring their shared love of the history, landscape
and ungoverned sky of the ‘debatable lands’ between Scotland and England.

Drawn from Borders – An artist led group exhibition exploring the concept and
reality of borders, specifically the border created 100 years ago by the Partition
of Ireland. In partnership with the Nerve Centre and Tower Museum, Derry, and
Artlink, Donegal. As a result of the Coronaviris crisis lockdown the exhibition
was presented in a virtual environment at the Saldanha Gallery, Fort Dunree.
A First Victim – an audio/visual piece (taken from the Bovedy Illuminations)
shortlisted for the Ó Bhéal International Poetry-Film Prize, Cork Festival.
Places We Love – Paintings to poems by Séan Body. Artlink Members Show.

The Bovedy Illuminations – two complementary exhibitions, including a specially
created short film, to mark the 50th anniversary of the Bovedy Meterorite.
The Armagh Planetarium and The Market Place Theatre and Arts Centre.
The Bovedy Illuminations – a special event and showing of the film alongside
readings and discussion with the poet Gerald Dawe.
The Helicon Theatre at the Seamus Heaney HomePlace.

Wounded Words – an exhibition of prints, poems and a 40 piece photowork
installation for the John Clare Cottage Museum, Cambridgeshire.

Coast – Photographs and poems from Donegal, selected for group exhibition
at the Shire Hall Gallery in Stafford.
The Bilko Rosary and The Quiet Man: an interrogation – Poems and Photoworks
and an audio-visual piece at the Verbal Arts Centre, Derry / Londonderry.
Insiders and Outsiders – Artlink Members Show, Fort Dunree, Donegal.

Whitworth Poetry Competition – prize winner – invited to read at Awards Event.
Alchemies – (Paradise Mill – a re-imagined space) – a photographic study, at Jordangate House for the Barnaby Festival, Macclesfield.
In the Pause of Passing – Paintings of the North Pennines by Paul Stangroom, with poems by Noel Connor (Whin Sill Press, Northumberland).

Streetscene (listening to a painting….) – a poetry sound piece for the Grassington Festival, inspired by the Leeds City Art Gallery’s Picture Lending Collection.
Tidetrove – poetry and photography derived from the Atlantic coastline of Donegal, for the exhibition Gold, Silver and Bronze at the Shire Hall Gallery, Stafford.
Portico Poetry Prize – prize winner – invited to read at Awards Event and published in winners anthology.

Companion Stones – a collaboration with artist Adam Walkden to produce a companion piece to be placed alongside a three hundred year old ‘guide stoop’ on Beeley Moor, Derbyshire.

Punctuated Epiphanies – a series of prints based on selected pages from Ulysses by James Joyce, displayed for ‘Bloomsday’ at the Context Gallery, Derry.

You are here – eight site-specific poems written and displayed to match existing information stands, for the Radio Halo Project, at Jodrell Bank Science Centre and Arboretum.

Drawn to Words – a solo exhibition at the Portico Gallery, Manchester.
Poetry Instants – poem-print ‘scratchcard’ collaborations with twelve British and Irish Poets, exhibited at The National Poetry Society, London.
Poetry Instants – an event commissioned by the Manchester Irish Festival and Manchester Central Library, enabling readers to produce and exhibit their own poetry instant scratchcards in collaboration with the poet Roger Garfitt.

Beyond Photography – The Photo-Arte Gallery, London

Initials – an exhibition of painting and prints, The Kenny Gallery, Galway.

Wall of Words – Artists and Poets Working Together – Brighton Festival.

The Game of Love and Death – poems by John Heath-Stubbs, illustrated by Noel Connor, (Enitharmon Press). Exhibited at the National Poetry Library, London.

Talitha cumi – a collection of poems and drawings edited and contributed to by
Noel Connor (Bloodaxe Books).

Gravities – a book of drawings to poems of Seamus Heaney (Charlotte Press, Newcastle-upon-Tyne).
Assemblages and Drawings – Spectro Gallery, Newcastle-upon-Tyne. In the Egyptian Gardens, a poem-print collaboration with Tom Paulin (Issued by Sunderland Press).